My second release under the guise of ‘fascinating earthbound objects’ finds its way to your ears in the form of this 20 track album. Running the gamut of unrestricted genre exploration, expect a little bit of everything. Enjoy!

Album made with tablets and phones in various forest-y places, coffee shops, beaches, and balconies with Caustic 3 by Single Cell Software (www.singlecellsoftware.com)


Good bye, old self,
welcome to the new century,
no matter, when it begins.

The power lies inside the calm. And beat.dowsing again enjoys us with his new album, full of sunny n peacy tracks that warm the winterly hemisphere and properly heat up the current summer hemisphere.

Phonocake is honored to bring this full length downbeat electronica release by beat.dowsing a.k.a Transient, one of the first musicians who were active in the world wide web.

And big up n thanks goes out to Kaylee Kopas for providing the great piece of visual art.K00PS.tumblr.com/

Music, made deep in the woods.
The big rabbit invites you,
to listen to the sounds of the creek,
the trees and the birds.

This release is impressive in some ways. You see the creek depicted on the cover artwork? It’s one of the artists favorite spots to chill and to create music. He produced all the music in the forest using a tablet computer, making most of the tracks in the stunning forests around the albums namesake ‘Chiquesalunga Creek’.

And the artist is none other than one of the root free Netaudio stars online – Transient. Having released last year on Phonocake as Beat.Dowsing we now connected again to bring you his new seven track album under his original moniker.

And that’s not all! You are invited to remix and explore the tracks! — the source files which can be opened in Sunvox are included – a first for Phonocake. Please send any remixes to the artist and to us. Contact and instructions are included in the Source files directory. 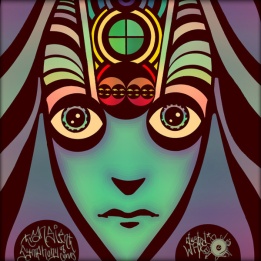 Release Text (Dusted Wax Kingdom):
This is the special remastered edition of “Symphony Of Curves” EP by Transient (originally self-released back in 2010). A sample-heavy trip into deep downtempo dimensions and a tribute to the music of the 30’s to the early 70’s. Released as MP3 in 2010 on noisyvagabond, Re-Issued and Re-mastered by VPD on Dusted Wax Kingdom in 2013.

Having taken a break to explore some new projects (most notably beat.dowsing and fascinating earthbound objects), I return from a long hiatus with the first material as transient in over 2 years. Here is the beginning of a series which might be the spiritual successor to the ‘palm cuts’ releases housed here under the noisyvagabond label. All the music was made in the forest and powered largely by solar.
Made with Bhajis Loops (www.chocopoolp.com) on a Palm Lifedrive.

A short (18 minutes playtime) ep premier in the style of electronica crossed over with elements of dub and class. Sounds reverberate with slight details, good solid basslines and addictive elements. A worthy addition to the Kahvi catalogue! Track of choice is certainly the ‘can’t get enough of it’ Moonsun.

Release Text :
It’s so great that we can welcome one of our alltime fav netaudio heroes here at Phonocake. KO, this is for you too! Congrats to Phonocake’s ninth birthday. Here comes Carl AKA transient, from somewhere off and on, in and around upstate NY, who’s been present since the beginning of audio and music in the www. He hasn’t released for about two years in a longer format and presents here his first material under the beat.dowsing moniker. Here we go with seven tunes and two bonus remixes to enjoy summer vibes and more.

Thanks to Kaylee Kopas for the Digital Art ‘Luck’, the big eyed rabbit and forest spirit, (http://melancholiah.deviantart.com) and to Lumeet and Carmen Chiles for the remix material. http://www.lumeet.net && http://www.reverbnation.com/carmenchiles

Release Text:
Transient is back with another release full of lovely loungy vibes, trancy moods, glitch-hop beats and chilled ambience.
Green Butter EP is your perfect music pill to make you feel great and spread the spring freshness.

A rare cohesive release for me dedicated fully to the dance floor. Explorations into the classic elements of house, techno, minimal, acid, and disco. Feel free to move!